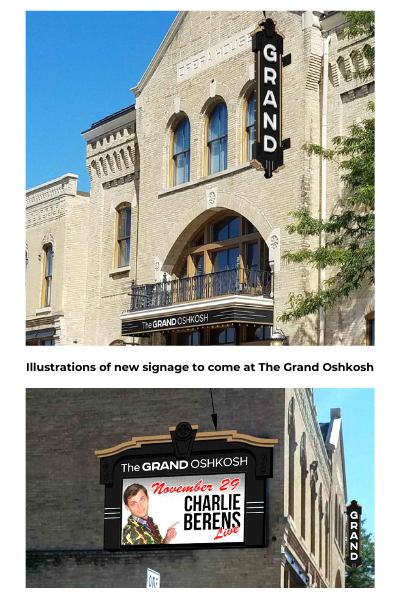 Just in time for Christmas, The Grand Oshkosh is pleased to announce a wonderful present for the community’s 137-year-old jewel box theater.

Joseph Ferlo, Director of The Grand Oshkosh, announced an exciting new project. In the coming months, The Grand will receive a makeover of its marquee, restoration of a blade sign which has not appeared on the building since the 1920s, and upgrade of its message center to a state-of-the-art electronic sign. The entire project will be accomplished with no taxpayer dollars, and will be a gift enhancement to the facility from The Grand Oshkosh.

The project will be completely funded through the first of several “branding licenses”, and will be known as the Festival Foods Marquee.

This project represents the first of several branding licenses which will be set in the months ahead. It is a game-changer for The Grand as it struggles through the pandemic, like other performing arts venues worldwide.

“From the outside, The Grand will be exactly the same, except for these tremendous enhancements,” Ferlo said, adding that the design of the signage is reminiscent of the 1920s Grand Opera House. “The building will remain the Grand Opera House, but the addition of branding licenses to elements like the lobby, auditorium, and Grand Lounge not only provides us with a new income stream at a time our traditional income streams are slowed or stopped, but also a mechanism to continue to maintain and improve this wonderful, living piece of history.”

For each future branding license, 25% of the income will be placed into a special account at the Oshkosh
Area Community Foundation, and will be designated for further improvements to the theater complex.

The Grand hopes these branding licenses will open the door for long-time supporters to create a meaningful impact for years to come. For more information on branding license opportunities, contact This email address is being protected from spambots. You need JavaScript enabled to view it..